Bad Back and 3D Boredom

Hi all,
It's not been my week this week.  Whilst having a clear out of our loft stuff I then took it to our local tip recycling centre an pulled a back muscle emptying some cardboard into the skip.  Now the cardboard was not heavy nor did I struggle to put the cardboard into the skip but as I lent over I felt a twinge in my lower back.  I thought nothing of it until next morning when I tried to get out of bed.  The pain was unbearable and the room started to spin so I eased myself back under the covers.

A few days later whilst dosed up on pain killers I managed to get to the doctors to find I've done nothing more than torn a few muscle fibres so am relieved.  Having been advised to take it easy for a few days I've had a few days off work and will return tomorrow on light duties as the pain killers are helping and the pain is subsiding slowly though I fear a few more weeks yet before all is normal.

It not the first time this has happened and will not be the last.  I put a disk out in my lower back after a car crash when I was eighteen and every now an again it moves ever so slightly sending my back muscles into spasm.  There is no rhyme or reason for it.  It never happens the same way or same motion so cannot be avoided.  Seems this time my arm movement at the same time as the muscle spasm also resulted in a few torn muscle fibres as well. 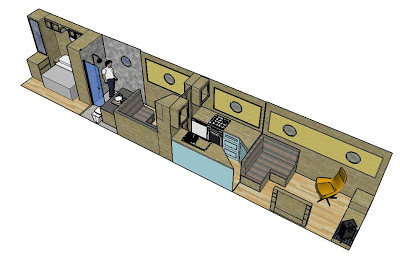 This is only a rough idea as the fine details have still to be finalised but it does give some idea.  Please ignore colours and textures as Sketchup is limited on choices.  It also does not include the back cabin and loo as this is very much a blank canvas that we are leaving for Fernwoods as they have electrics etc that they need to get in.  We prefer to leave the design to them, plus, we have to keep some things to the last minute otherwise there would be no interest for you now would there :-)