Thank you to all those who commented congratulations to my announcement in the last post.  Having made the decision it feels like a weight has suddenly lifted of my shoulders and June cannot come quick enough.

We had a rare free day on Saturday so Chris and I took the train into Liverpool for the day.  On the itinerary was a visit to see the ceramic poppy's that originated from the huge display at the Tower of London in 2014.  Not all the poppy's were sold off as artist Paul Cummins had incorporated two elements of poppy's called the wave and the weeping window into the display.  He wanted these elements to remain as a lasting legacy to commemorate those who gave their lives.  The poppy's are now touring the UK.

The breath-taking sculptures were initially conceived as the key dramatic sculptural elements in the installation Blood Swept Lands and Seas of Red at the Tower of London in the autumn of 2014. Over the course of their time at the Tower, the two sculptures were gradually surrounded by a vast field of ceramic poppies, each one planted by a volunteer in memory of the life of a British and Colonial soldier lost during the First World War. Over 30,000 people volunteered to take part in planting the poppies, with the final one placed in the ground on Armistice Day, 11 November 2014.


Nowadays the element called Weeping Window is housed outside St Georges Hall in Liverpool.  As we missed them at London Chris was really keen to see them whilst they were here.  They will be moving next week to Lincoln Castle so Saturday would be the last chance to see them before the display is dismantled for transport. 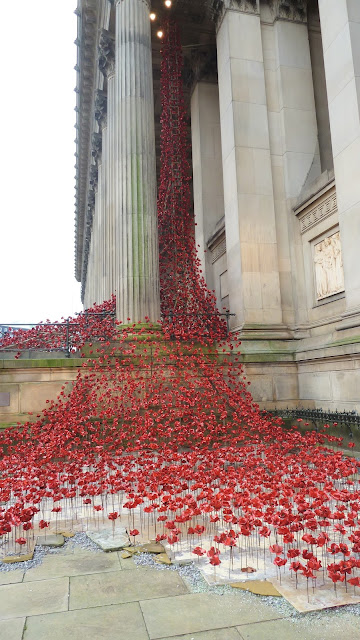 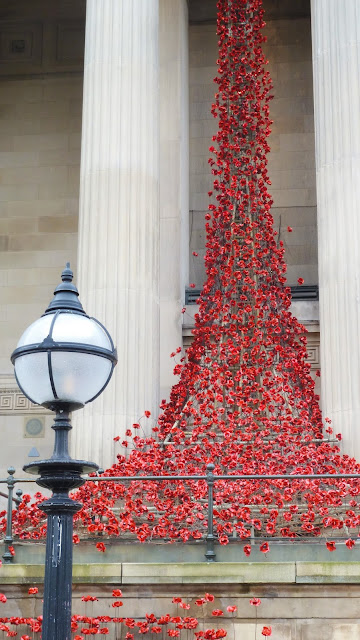 Now I don't consider myself an emotional person by any means  but for some unfathomable reason this lone poppy standing tall above the others really got to me and I just stood staring at it for some time.  Daft I know but I just could not help looking at it.  Somehow out of all the poppy's I could see before me this one poppy struck a chord for me.

After lunch in Costa coffee we wandered round the Maritime museum then headed home, cold but enjoying the day.
at 14:16:00

Just seeing those poppies on your blog is making me emotional too. It must be so much more moving to see them in real life.