Today Chris and I took ourselves over by car to the Middlewich festival.  The weather threatened rain but we only had a light shower and then for the rest of the day it remained dry but cloudy though mild

We were lucky to nab a parking space close to the bridge where most of the boats were moored.  We walked along the tow path and we were just in time to see Ilford being roped down the locks.  We last met her at Audlum as we descended the locks back in July as we cruised AmyJo up to Tattenhall from Crick.


As one would expect there were many boat stalls selling their wares but I simply had to support this cause and help drink the bar dry.  Though my one pint hardly made a dint in their supplies I suspect. 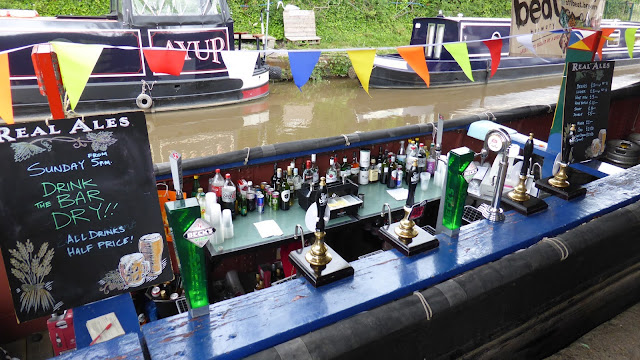 The owner of this boat must have a really steady hand and patience of Jobe.  These were not paintings but art cut from old LP records.  Such fine cuts by hand using just a fret saw must have taken hours to compete just one record.  The detailing was simply amazing. 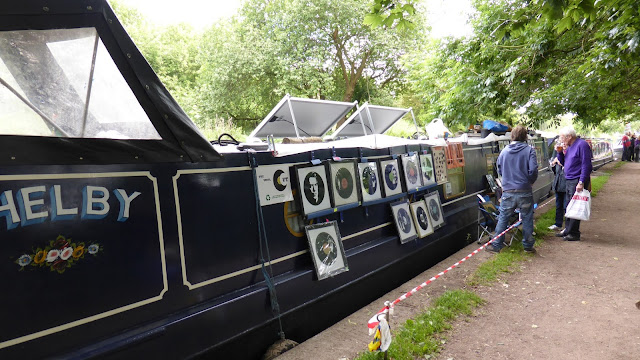 Further along we spied Andy and the Jam Butty.  A fascinating little butty made from the rear of butty Montgomery and 15ft of a 1911 BCN day boat bows.  Andy and Helen had her restored at Stretton wharf and now use her to sell lovely home made jams.  Andy, AKA Captain Ahab, has a blog that tells of their Journeys with Jam Butty (here)

A good while ago I came across a blog (here) called the Pen Maker's Boat.   They were (and still are) selling beautiful hand made pens made from various hard woods.  I ordered two from them, one in Ash and one in Oak, to match AmyJo's interior and have been delighted with them.  They are lovely to write with, are really comfortable to hold, and today we were able to let James and Debbie know how pleased with them we are as they too were at the festival.


Chris was temped by the next boat, the Boarder Cheese Carrying Company (Click).  We quite like mature cheddars and so after being offered a taste of some of their wonderful cheeses we came away with a bag full. 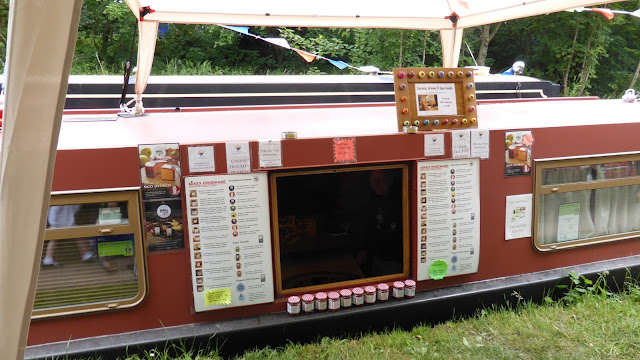 A little further along and the next boat needed no introduction.  Many boaters will know of Barry and Sandra (AreandAre) from one of the seminars at Crick this year.  They have been running their beer making kit business for a while now and business has been going well for them.  We stopped for a chat with Barry but we could not get to talk to Sandra as she was so busy with her face painting.  Barry seemed to be doing a brisk trade and we too relieved him of a home made beer kit during a quit spell in trading.

Back home this evening aboard AmyJo we had another vist from our local swans and their family of five Signets.  Dad has taken to tapping on the jetty with his beak to let us know they are here.  I think he knows Chris cannot resist giving the littluns some food.  Tonight they had floating duck food we bought at the festival for a treat as we know not to give bread.  They are growing so fast and appear to be doing well.