Hi all,
Now the weather has improved boats are starting to move on the cut more when they can, restrictions allowing.  One such boat, Hadar, is up from Market Harborough visiting Ellesmere Port Canal boat Museum for the Easter boat festival and is in Chester at the moment.


Hadar is a replica Small Northwich narrow boat of the "Star Class" originally built for the Grand Union Canal Carrying Company (GUCCCo.) by W.J. Yarwoods of Northwich. She was built by Roger Fuller Boatbuilders Ltd and completed in 2007. 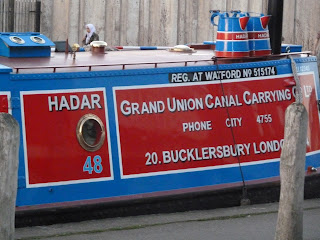 Chris and I have regularly read Keith and Jo's blogs Where I belong and Hadar communicating with them from time to time and so we arranged to meet up with them last night (Tuesday).


Jo, Keith, Paddy and Marmite made us more than welcome when we arrived and we were honoured to be given a tour of Hadar.  I think I made a friend of Paddy who took all the fuss I gave him.  Hadar is an impressive boat, beautifully built and is actually a bit of a "Tardis" in as much as she looks a lot bigger inside than she appears from the outside. Jo and Keith are right to be proud of her as she is a lovely boat.  At 70ft she is 5ft longer than AmyJo will be and for the first time Chris got a clue as to AmyJo's intended size.  I think she may be a little bit daunted by that but it won't put her off. 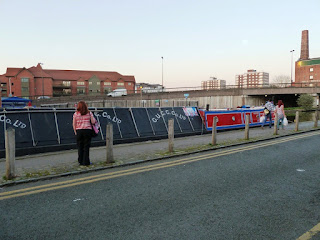 As it was a lovely evening we went for a drink in the nearby pub, "The Lock keeper". Those of you who have been on the canal visiting Chester in the past would know the pub as "The Frog and Nightingale".  Recently under new management and renamed, the pub has been refurbished and now keeps a nice ale.

We had an excellent time chatting and listening to Jo and Keith's exploits which we enjoyed very much and giving them our ideas for AmyJo.  Keith is very knowledgeable having been around boats all his life gave us some very valuable pointers for which we are most grateful and so our list of things to consider has now grown considerably :-).

We all enjoyed ourselves so much that before we knew it was gone 10.45pm and so we had to say our goodbyes with the promise to go see them again at the Easter boat festival at Ellesemere Port.

We would like to thank Keith and Jo for allowing us to spend some time with them,  we are most grateful and hope to keep in touch.

Thank you for taking the time to come and see us. We had a fantastic time, and look forward to seeing AmyJo as she takes shape and then again when she is afloat.
Time always flies when your having fun and we did have fun with you the other night. You more than welcome to come and see us anytime.
Hugss xx