Been on a Blog holiday

As you may have guessed already the blog has not been updated for some time.  Mainly because I wanted to have a break from it for a bit but also because we have settled back into marina life for the winter.

It is, however, quite humbling when people come up and ask when am I going to post the next installment of the blog.  Whilst I knew people took time to read my missives here I have greatly underestimated just how much the blog is enjoyed by many.   So, after many requests to get on with it here we are.

As you may recall our previous post had us spending a few days up the deserted Middlewich branch, which from the Shropshire union still has 8 navigable miles.  Our return from there had us moored up for a week below Iron lock by Chas Harden boats.  The weather was becoming changeable but still pleasant so I took the opportunity to start to prepare for the coming winter by giving AmyJo a good polishing.  This year I used different polish recommended to me by the late Andy Munro of Fernwood boats.

I say late as we heard the sad news that Andy had passed away suddenly.  Such a shame and a good man who will be greatly missed.  Alas, as a result, Fernwood boats are no longer trading but their legacy lives on in the boats they built like AmyJo.

Anyhoo, to clean off the marks I used Farecla G3 colour restorer sold in Halfords.  This is a clay based product and does not remove paint unlike T-cut, but does remove scuffs and grime whilst restoring colour.  The result was amazing with the resultant colour and shine showing up how tired AmyJo's paintwork had actually become.  After that, a going over with Farecla G3 Super Wax brought the paintwork back to its original mirror glaze.

The big difference with this polish seems to be the shine appears to have lasted much longer and is still bright today as I type.  The rain beading and running off easily.

Whilst moored at Chas Harden's moorings we had a bit of excitement one morning.  I had popped out in the car to drop Chris off to work but got back to a static traffic Jam near our mooring.  Those who have moored here will know of the railway bridge nearby and the road passing under it.  Seems a lorry driver with cattle trailer mis judged the line going under the bridge and manged to get it wedged firmly under it


The lady driver escaped unharmed and fortunately no livestock was aboard when it happened.  I was told she had done this run many times before but this time had to apply brakes because of a slow car ahead of her.  This caused the unit to dip and the front of the trailer to rise causing it to catch the parapet jamming the truck in the process.  So jammed was the truck it took two heavy recovery trucks to pull it out.   The road was then opened, one lane only, whilst the bridge was inspected and damage to the road repaired.

September was upon us and we had booked AmyJo into Tattenhall for her haul out and blacking.  When she came out we were disappointed as the blacking was once more virtually gone and bare steel was left.  I've had it with using Keel black and will never use it again, instead, this time we have gone with tried and trusted Intertuf 16 Bitumen blacking.  This is what most boats are painted with and is a proven blacking so we'll see how this fares.

This year we had a willing helper in the form of our eldest daughter, Amy, who spent the day applying blacking after the hull had been prepared.  The weather was kind to us this year so a good job done and out of the way.  I do so hate this part of boating.


When AmyJo was relaunched we spent a few more weeks around the area between the marina and Chester, moored up in various moorings and Chris commuting to work.  I moved AmyJo on Mondays to a new location to keep C&RT happy and not overstay.  The cut here has been very quiet this year due to the Breach at Middlewich so our favourite mooring spots have always been free when we got to them.

In the beginning of October the days started drawing in and the weather more inclement.  We even had to wake up the Hobbit fire and light it in the colder evenings. Signs winter was near came one morning when at 6:30am I took Smudge for his first walk and enjoyed this stunning view

With the shorter darker days we were running the engine more to keep the batteries topped up so mid October we decided to go back to the marina for the winter.  Such a shame as we have had a fantastic summer this year but, whilst Chris works, marina life in the winter best suits us.

Running the engine more as winter approaches is normal as the drop in solar power occurs as the sun gets lower in the sky but, I was beginning to worry about the lack of power being generated by our panels. It was way lower than usual.   It was not until storm Hannah reached us that we found out why.

The night of the storm we sat listening to the wind and a deep booming sound like a bass drum that we could not fathom.  Eventually I grabbed a torch and ventured outside to find one of the Solar panels on the top box flapping in the wind.  The solar cell substrate had delaminated from its base sheet and was now bending double in the wind dropping back when the wind eased, banging on the lid of the box.  The only reason we did not loose it was the fact I had zip tied its cables to the lid of the top box.  Next morning inspection of the other three found two more going the same way


I had not want to go with solid panels as I considered them unsightly but this experience with semi flexible ones has forced the issue.  After a phone call to Onboard Solar, Tim was on site in November to fit 4 x 165W solid solar panels. As we have a 24V system this will give us 330W of solar power, 130W more than before.  Even on a dull cloudy day these panels put out 2 amps of power at this time of year.  I look forward to see what they produce in summer.


Tim usually likes to mount the panels in the center of the roof but because of our boarding plank and pole rack he had to offset two to one side.  Whilst this is not as neat as he liked it still does not look too out of place and does still leave walking space on the roof.

I have to admit they don't look too unsightly and I actually like the way they have been installed.

With time on my hands now I have turned to my many planned winter jobs.  One of which was to increase storage space in the galley.  To do this I am adding some plinth drawers to available voids under the kitchin units.

I reckon we can fit 4 drawers using B&Q drawer packs and using the original plinth as drawer fronts.  With these installed there is enough height in a draw to stand a standard sized tin of beans upright and more importantly room to lay 12 bottles of wine!

I managed to find some nice handles to put on the draws that will not catch your legs as they do not stick out very far.  I'm quite pleased with the result and, there is still enough free space to allow air circulation to stop condensation forming behind them. 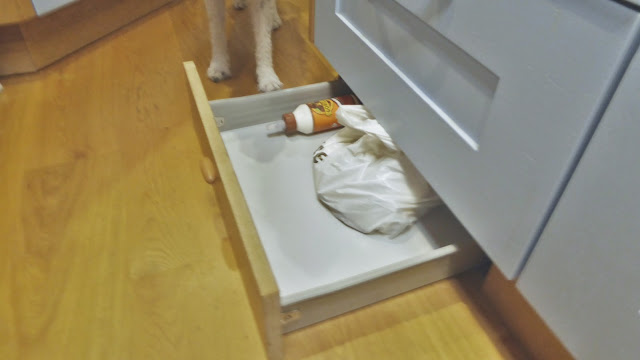 So that's where we are up to so far.  We are planning a couple of small trips out before the end of the year but I'll save these for another post, at least they will give me something to bore you with.

Oh and for those wandering how Smudge's leg is getting on.  Its completely healed and he walks just fine, in fact he's his old self, running and jumping about as before so has made a full recovery, though, with the colder nights now with us he has taken to disappear whilst on board from time to time only to be found ......

Welcome back to blog land, you have been missed.
Robin and Jenny Romany Rambler