At last its the Bank Holiday!  Schools out for 3 weeks so we joined everyone and their dog out on the cut.

One thing I hate about holidays is waking up early in the morning.  As one is conditioned to get up with the alarm at 6:30am its no different when on holiday. This morning I was awake at the usual time.  I struggled to lay in until 7:30am and just had to get up :-)

Today is the first day of our two week cruise up the Gollen.  We do it this time of the year as its still not too busy so getting into Llangollen is not as chaotic as later in the season.  It will be a while before we're back this way so hence this trip.

As I made Chris and I a cup of tea first thing the local residents came to wish us bon voyage though we hope this guy was just warming his foot and not injured.

The swan stayed with us while we prepped AmyJo for cruising and was quite content to watch right up close.  I'm sure he would have been happy for us to touch but that beak can do some serious damage to fingers.

The bright morning promised to be a good one and temperatures started to rise shortly after we left at 8:50am.  In fact it got so warm we cruised in t-shirts for the first time without feeling cold.


By now the marina was emptying out and load of moorings were empty.  We feared it was going to be hectic on the cut but though plenty of boats were on the move it was not as busy as we thought it would be.

We followed two boats ahead of us passed the Shady Oak and thought we would be on our own going up Wharton Lock but just as we moored up to wait our turn Mandy and Alan on nb King David pulled in behind.

We had a great time working the locks with them and Mandy's sense of humour kept us smiling all the way.

Chas Harden must be having a good start to the season as only a few boats were still on his wharf as we passed by, 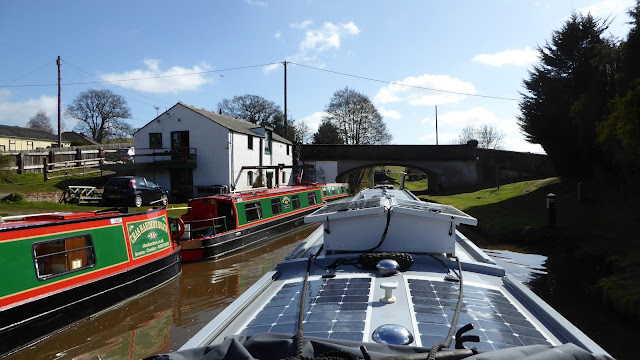 A little after Tilstone lock we sighted a pair of Kingfishers but as you know they were too quick for the camera so we made do with a photo of this lovely little Manderin duck. 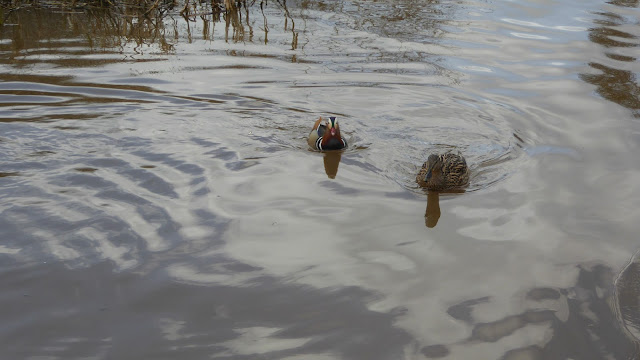 With Mandy helping Chris with the lock wheeling we made good time through all the locks and through Bunbury staircase, pausing only briefly to let two boats down the staircase.  This gave me the opportunity to chat with our friend Steve at Anglo Welsh who was busy cleaning the boats.

We decided not to stop at Barbridge as planned as we had made such good time we would carry on as it was only 2pm.  Just as well as the moorings around the Barbridge inn were pretty full being the weekend.  Arriving at Hurleston a boat was just clearing the bottom lock, so I was able to go straight in.  Only one other boat was descending so we passed each other in the pound.

After the double locks on the way up from Tattenhall, Hurleston's single locks always seem so tight.  AmyJo fits in well but there is not much room to spare so entering and leaving has to be done with care.

Rising 34 feet the view as one rises in the top lock on a clear day is fantastic.  I love looking back over the Cheshire plain from here

As we cleared the top lock we came across coal boat Mountbatten breasted up with another working boat.  We hailed them and made arrangements to meet up later in our cruise for diesel as they would be coming upstream later next week.

We found a lovely deserted mooring just after bridge 2 that just happened to be near Snugbury's ice cream factory.  Chris decided we would cycle along the foot path to the factory and we would try an ice cream.  What we did not reckoned on was the foot path skirted fields and was rutted with tractor tyre tracks, so badly cycling was impossible

To make matters worse my bike suffered a puncture on the rear tyre so walking was the only option.  By the time we arrived at Snugburys I was really hoping it was worth the effort.  After queuing the yummy Strawberry Cheesecake ice cream I had and the Maple and Walnut one Chris had was most welcome indeed. 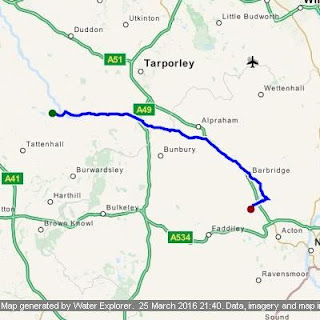